“I have a simple question for the Chief Executive,” she spoke in her soft, no-nonsense voice. Barrister Ng is one of the few public figures in Hong Kong whose speech carries equal intelligence and gravity in both English–which she speaks eloquently, with an academic British accent–and Cantonese, which she pronounces precisely with the genteel, somewhat old-fashioned tones and inflections of Canton. My first teacher, Mr. Wen, would approve.

“My question is this.” She paused. “On the 20th anniversary of the 1989 incident, many Hong Kong people are concerned about an issue of the most extreme importance…

“We would like to know, Mr. Chief Executive, do you, or do you not support the vindication of the June 4th (Tiananmen Square) incident?”

As I watched this drama play out(on live TV in the comfort of home, thanks to NOW Direct, Hong Kong’s own C-Span) I observed Tsang’s face freeze into that tight mask he adopts when he knows he must deal with something he’d really rather not.

Aiming his gaze out at the chamber, not at Margaret, he took a breath, and then words began pouring out.

“This is something that happened a long time ago. The national economy has grown and brought prosperity to Hong Kong….the Hong Kong people have made their own judgements.”

Margaret Ng stood again, her voice now rising in pitch, incredulity and fury. “Am I understanding the Chief Executive’s meaning? Do you mean to say that as long as the economy is prospering that we should not care about people who were killed? That we should bury our conscience for economic benefits?”

Tsang has the George W. Bush reflex. When cornered, he gets testy and starts swinging back like a street bully. “My view represents the opinion of Hong Kong people in general,” he huffed back at Margaret.

At this, a man up in the public spectators’ gallery jumped up and  started shouting Tsang down. Several security guards surrounded him, and bundled him out of the chamber. As they did, chaos broke loose down on the floor: the LSD’s Wong Yuk Man and Long Hair also began shouting. Labor legislator Lee Cheuk Yan stood up to denouce Tsang. Then, he, Margaret Ng and the rest of the 20 or so pan-democrats in the chamber turned their backs on the Chief Executive and walked out. Legco President Tsang Yok Sing had to adjourn the meeting. Later, the democrats gave a press conference and raised hastily printed banners with the slogan that swept across Hong Kong today: Tsang Yam Kuen, Bat Doih Biu Ngoh! 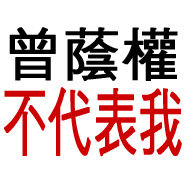 Donald Tsang, You don’t represent me!

Today’s Hong Kong papers are filled with unflattering headlines and stories about Donald Tsang’s sat yin 失言
–his “slip of the tongue”. (The literal meaning of the two characters 失言  combination is “lose speech”. The “sat” character is the same one you’ll find in other ill-fated Chinese expressions like failure (sat baaih), unemployed (sat yihp) and disappointed (sat mohng). )

Tsang came back out after his gaffe when the meeting resumed and apologized, kinda sort of, for his loss of words in the face of Margaret Ng’s firestorm of indignation. He said he was sorry to have raised such unpleasant emotions. His aides later ran around spinning the ridiculous excuse that Donald Tsang–the Hong Kong born and bred son of a cop– made an error because “he’s really more comfortable speaking in English than in Cantonese.” (Last year, when Tsang made an inconvenient remark in an English language interview, his spin-doctors proclaimed just the opposite).

Then, thirty minutes after the meeting, he faced the press and said that he shouldn’t have claimed to have been speaking on behalf of all Hong Kong when he suggested that people have “moved on” from the Tiananmen Square massacre.

After lunch today I saw my friend Eddie, who summed the Tsang debacle up in three words: “What an idiot.” June 4th is a couple of weeks away. Zhou Zi Yang’s posthumous memoir of the sordid behind-the-scenes story of the Tiananmen affair was published today. (if you speak Mandarin you can
listen to some of the tapes his followers smuggled out of China at the
New York Times website.) It’s a perfect storm of bad timing. As of 6pm today, more than 2,700 members have joined the Facebook group “Donald Tsang Does Not Represent Me”.

Thanks to Tsang’s awkward handling of a pointed question he should have known was coming, it’s pretty much of a slam dunk now: there will certainly be record crowds of Hong Kongers at this year’s candlelight commemoration of the fallen Tiananmen students in Victoria Park on June 4th.

So I’m happy for Donald Tsang’s sat yin. Because the terrible, unspoken truth here is that he is right–many, many Hong Kongers would rather forget about the ugly murders of 1989, and the subsequent persecutions of the victims’ families, stick their heads in the sand and just go about their daily lives. It takes a soaring, courageous and eloquent figure like Margaret Ng to galvanize people into action, to remind them to act according to their better nature. To remind them that sometimes you must look back in anger in order to look forward with hope.

I only wish that Donald’s slippery tongue disease was as contagious as swine flu and could infect, and draw shame, on politicians across continents. Yesterday, just a few hours before Tsang’s blooper, the U.S. government–Barack Obama’s government–changed its mind and decided to block the release of photographs of the victims of American torture. And so, the Obama administration continues the Bush policy of hiding America’s own festering Tiananmen behind lies, elaborate justifications and cover ups.

Like Donald Tsang, Obama has lots of soothing words for his public. We shouldn’t dwell in the past. We need to look forward. Move on. Transform America. Rebuild the economy.

But as I’m sure Margaret Ng would say, if she were rising to the occasion in the House of Representatives in Washington DC instead of the Legco chamber in Statue Square, “What about the people who were injured and maimed? Are you saying we should just bury our consciences because it might disrupt national harmony? What about justice, our constitution, and the rule of law?

Sometimes this life I live bouncing back and forth between Hong Kong and America makes me dizzy with dislocation.  Traveling thousands of miles, between cultures and continents, the narratives of each place twist and wrap around each other, and the words of arrogance and power seem to converge into a single stream, a language that is, at once, English and Chinese.

In these dreams, Barrister Ng is standing like a beacon in Legco–or is it the U.S. Senate?–as she proclaims in her clear, steady tones: “It is our obligation to remember. Our duty to vindicate. We must therefore not hesitate to look back, and look back we shall. Now.”