Everybody I know is bun nguk. Moving. Anh thu to Happy Valley, driven away from Elgin Street by the creeping Lan Kwai Fong-ization of Central (despite the recession, the drunken expat bar scene has been spreading across my neighborhood like an extra-terrestrial mold, swallowing up the Persian carpet stores on Wyndham Street, the antique dealers on Hollywood Road. Now, Saturday nights are a parade of women encased in lycra minidresses and strapped into spike heels teetering woozily down Shelley Street’s 70 percent grade.)

In English, “moving” is a verb–the language emphasizes the action, implies the uncertainty of transition. But
in Cantonese, the stress falls squarely and practically on the noun of place: bun nguk means, literally, “change
house”. Maybe this is why I feel so unsettled and anxiety ridden by moves, even when (or maybe especially when) I am not the one moving.

But my Hong Kong friends David and Ah Lan have no such emotional baggage. Next month they will say goodbye to their 6th floor Caine Road walkup in the tong lau  with its magical tin toi and decamp to a new flat in Kowloon Bay.

David got the keys on Friday, and Saturday morning we all went up to Gaau Lung Wan to inspect the premises.

Kowloon Bay is not a neighborhood you’d ever think to visit if you didn’t live there yourself (or know someone who did). Decades ago, in the time when the proud label “Made in the British Crown Colony of Hong Kong” dangled from toys, plastic flowers and transistor radio sets, the area was an industrial center, home to small factories. But in the mid-60s, Hong Kong’s colonial government faced a housing crisis, with more than a half million squatters, refugees from Mao’s economic “reforms”, living in slum conditions. The bureaucrats embarked on a public housing program, kind of a low-rent version of Britain’s own council housing estates. The relatively unpopulated Kowloon Bay became the early staging ground for this grand social experiment, which continues to the present day.

We emerged from the MTR station at Kowloon Bay to a archeology of public housing estate architecture, old and new.

The building in the foreground, marked with the number “10” is part of Lower Ngau Tau Kok estate, and it is one of the reasons I was extra-eager to accompany David to check out his new digs (which are in a private housing estate about 10 minutes walk away). Built in 1967, “Lower Cow Head Corners” estate is a vintage example of early Hong Kong public housing architecture. It’s going under the wrecking ball in a month or so, and lately it’s been the subject of lots of newspaper and magazine articles and even an artists’ exhibit.

“Let’s cut through the estate,” David suggested. “Then you can see the old grassroots shops and food stalls.”

We entered the estate courtyard from the bright sunlight street, and headed down a narrow alleylike passageway covered with plastic tarps and the occasional corrugated iron roof. The place teemed with commerce–here there was a cha chaan teng, over there was a vendor selling cooked dishes over a steam table. A sign overhead marked the palace of “Ah Jing” the “Big King of Lo Seui Goose”. 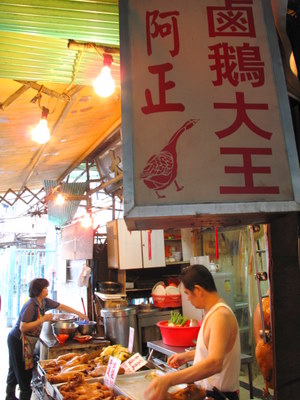 The residential buildings were decrepit in inverse relationship to the shops’ liveliness. Most of the residents had already moved into nearby, newer tower blocks. It was not a bad move to be making, from what I could see.

I felt relieved for the people who were getting out of here. The estate had outlived its usefulness, and seemed ripe for one of those disastrous events–fire, contagion, monstrous family murders– that spread across the front page of Apple Daily illustrated by hand with helpful cartoon strip re-creations of the gory scene. Indeed, during the 2003 SARS epidemic, Lower Ngau Tau Kok was one of the hardest hit areas. (Central Hong Kong, on the other hand, was almost untouched).

And yet, I completely understood the nostalgia that Hong Kongers have been expressing for the Lower Cow Head Estate as its last moments tick away. If you believe, as I do, that the real grassroots spirit of Hong Kong is the spirit of the Chinese village modulated by the constraints of cramped urban living conditions, then Lower Cow is a brilliant, Jane Jacobs-ean creation. Here, down these narrow lanes filled with crazy quilt, makeshift businesses, is the living genius of Hong Kong people who can transform a cheerless, bureaucrat-designed public housing block into a thriving, teeming urban village. One where the poverty of private cubicle space is overwhelmed by the glorious cacophony of living in public. 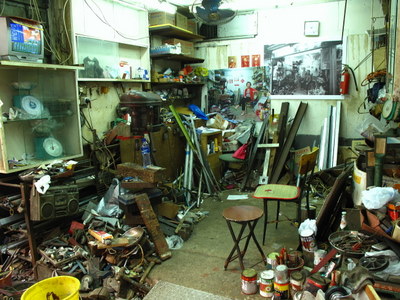 David and Ah Lan’s new flat is in an estate that’s ten minutes, and thirty years away from this scene. Built in the mid-1990s, the architecture is typical of the most recent wave of Hong Kong middle class housing: clusters of skyscraper tower blocks constructed upon wide concrete platforms that contain spaces for shops and markets.

The modern housing estates, unlike Lower Ngau Tau Kok, were designed with the control of public space in mind. After the early 1960s experiments in estate housing, the Hong Kong government decided that outdoor markets and shops were “un-hygienic”, and they set in place new policies to prevent the shopkeepers and food vendors (dai pai dongs) from setting up outside, makeshift stalls, and to force them to move into proper premises. Of course, when you force business into buildings, you create new income streams for property developers, too. 大家樂 —Everybody happy!

Except the on-a-shoestring, spontaneous small businesspeople like the ones who created the messy, marvelous urban village in Lower Ngau Tau Kok.

I’ve read the economic theory, so I know that choking off the ways that people from the grassroots can independently make a living is one of the strategies of late-stage capitalism. The big boys want Mr. Wong slaving away for them. They don’t want Ah Wong out there selling his cuttlefish sticks from a cart in the lane when they can make big rent money by having a branch of the Daai Ga Lok chain in the estate’s lower retail area. 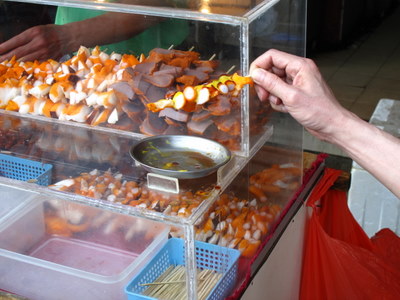 As we walk through the ordered, undistinguished shops underneath David’s new building, I suddenly understand the source of my anxiety. All around me, Hong Kong is bun nguk, changing houses. Trading up from damp, grimy tong lau walkups and ancient housing estates one step up from the squatters hut to better, cleaner, healthier flats in the property developer’s towers.

But what kind of lives are we moving towards? The nicer private spaces bear a steep price tag that’s greater than any mortgage can cover. We–and I say this about Hong Kongers, as well as New Yorkers–have been forced into a Faustian bargain, paying for better private spaces with the richness of our public lives, and our control over them.

The longer I stay in Hong Kong the more I grasp at beloved moments. I try to freeze all my friends, and our memorable dinners enjoyed on tin tois, holding onto them like a parent does a child, filled with fear these things will vanish if I loosen my grip or glance away. Before the handover, I am told, the city’s sensi
bility was ruled by anxiety and uncertainty about the future. But now Hong Kong seems to be about fear of loss. All these precious intangible things–the texture of daily life, neighborly connections, the patch of view from your window, the vendor who sells you cuttlefish on sticks–are being stripped away, erased from existence, by the relentless machinery of Hong Kong’s government, in cahoots with crony capitalists.

This fear manifests as nostalgia for the passing of the old Lower Cow estate. But lately it also has surged in the anger over the redevelopment of Wedding Card Street, and the destruction of the Star Ferry. It is, I believe, the most potent and untapped political force in Hong Kong. If I were doing branding for the pan-democrats, I’d be making spots filled with dai pai dongs and cuttlefish vendors cross cut with leering execs from Sun Hung Kai and with ex-Housing Authority turned New World Development honcho Leung Chi Man. I would use propaganda to make the point that democracy is all that stands between a rich, satisfying community life, and the people who want to re-design public lives to suit their profit margins.

But I don’t see the pan-Democrats doing that. Half of them because they belong, or aspire to, the profiteering class, and the other half because they are so focussed on street-fighting that they’ve forgotten the essence of what they’re fighting for:

The street, unmediated, lovely, independent and messy, bursting with the smell and sound and life of Hong Kong people.