Immediately, the news channels jumped into breathless action, showing endless grainy black and white security camera loops of one poor Mexican flu sufferer passing through HK immigration. The Hong Kong authorities, who clearly had been marshalling all their forces for this moment, commandeered, closed and quarantined the Metropark in Wanchai, the budget hotel where the Mexican man had been staying, forcing 250 staff and tourists to remain inside. The word was that they would not be allowed out for 7 days. (There’s a Hong Kong law on the books, passed after SARS, that punishes quarantine violators with a fine of $5,000 and up to 6 months imprisonment.)

The following evening, I was waiting for the Star Ferry in Tsim Sha Tsui, watching an overhead TV screen silently run and re-run shots of health personnel swathed in white protective suits swarming around the entrance to the quarantined Metropark hotel lobby. Seven or eight people waiting for the ferry wore green surgical masks over their faces. Taped up to a nearby post, I spotted this passionately hand lettered sign:

I decided then, to take the ferry back to Wan Chai instead of to Central, so I could rubberneck the scene at the Metropark.

It was a typical Hong Kong Police Department lockdown scene. (It made me nostalgic for the 2005 WTO demonstrations, which took place in these same Wanchai streets). The sidewalks were cordoned off on all sides, so pedestrians couldn’t get close. The press, as you can see, were crammed in a pen on the left, and the lobby windows had been screened with white paper so they couldn’t photograph inside. Police vans blocked the side street, and a big police command trailer had been set up across the street near where I stood, on the corner of Hennessey.

Cops hovered around. They were all wearing hau jau, surgical masks, a word I learned as a Cantonese student in Hong Kong in 2003.

Some cops had pulled off  the hau jau so they could eat their faan hap, their rice boxes. The press, also, were eating rice boxes. In Hong Kong, we take our flu epidemics seriously, but god forbid they should interfere with dinner.

It looked like everyone was hunkered down for a long stakeout. 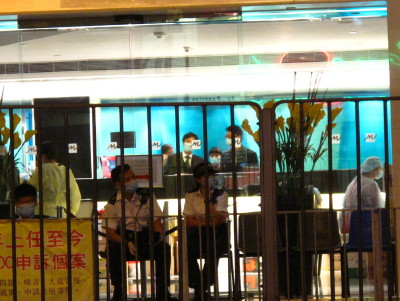 After a few minutes of nothing doing, I got bored and decided to head over to the nearby Wing Wah noodle shop, home of some of Hong Kong’s best wonton soup. I shuddered to think of the misery being endured by the most unfortunate tourists and workers inside, who imagined they were coming to Hong Kong to sightsee, eat wonton mihn, work or do business, and now found themselves imprisoned in a cheap hotel crawling with doctors and Hong Kong civil service bureaucrats.

Before the authorities put up white paper in the lobby windows, intrepid HK reporters had taped up messages with their cellphone numbers, begging “inmates” to call. Stories filtered out, telling of bureaucratic confusion and bad communication. The guests were told to stay in their rooms and avoid contact with other guests. Yet they were all herded into the lobby together for meetings and examinations.

They Gave Us Spam Sandwiches For Breakfast! read the subhead in the next day’s South China Morning Post.

What, no faan hap?

The rationalist in me knows the Hong Kong government is acting totally over the top. New York has more than fifty confirmed cases of H1N1, including one death, and nobody’s imprisoning tourists in their Best Western cubicle rooms. But if you ask my inner fraidy cat which city she’d rather spend an epidemic in, New York or Hong Kong, I’d vote for the paranoid, over-kill, bureaucratic and quarantine mad Asia World City every time.

I only wish they were as fanatically concerned for my health in the long term. Thanks to the vigilance of the Hong Kong government, it is highly unlikely I’ll get swine flu, or bird flu, or any kind of flu, and die. But if the government continues its policy of building massive highway projects, and allowing tycoon developers to build walls of skyscrapers that block air circulation, I may choke to death in five years from Hong Kong’s toxic air. The number of potential flu victims is a fraction of the actual tens of thousands of Hong Kongers who suffer from environmentally caused (and exacerbated) illnesses.

If Hong Kong’s hyper-drive flu season sounds to you like a bad case of politics trumping medicine, you’re not alone. I find it unsettling that feverish emotion, not cool science, is the driving force behind the Hong Kong government’s actions. My acquaintance Dr. Lo Wing Lok, one of Hong Kong’s most respected epidemiologists said on RTHK yesterday that the quarantine of the Metropark was entirely unnecessary, from a medical and scientific point of view.

Of course he’s right. And of course that’s beside the point. What’s really underneath all these hau jaus and quarantine edicts isn’t science, but fear and guilt. The mismanagement of the SARS fiasco, and the horrible way that people, mostly frontline medical workers and poor folks in dilapidated public housing estates got sick, is still a raw memory here. No government official wants to get it wrong again this time. Better to lock up tourists and trot out the contamination suits than follow sensible science. (And–thinking long range–sensible urban planning for one of the world’s most crowded cities).

So the more nervous of us don hau jaus, while others (like the South China Morning Post’s editorial board) praise the HK government for their terrific preparation and precautionary wisdom. Meanwhile, British tourists suffer Spam breakfasts locked in cheap Wanchai hotels while the poor hapless Hong Kong taxi driver who had the bad luck to ferry the feverish Mexican from his hotel to the hospital is hunted down by the Criminal Investigative Division of the HKPD.

And I walk–maskless and free–from Wanchai back to my neighborhood in Central Hong Kong, through narrow lanes where the bubonic plague once raged, and where now financial execs buy overpriced apartments and vomit lager on the Saturday night streets.

Wash your hands. Get a good night’s sleep. Together, we will resist the virulent flu.