Jong Sau! The rumors of our building’s impending renovation were put to rest last Christmas when Mrs. Wong, the doorlady, posted a copy of all six A4 pages of the coop association’s meeting minutes, in English and Chinese, underneath the red tinsel by the elevator:

Since then, we lowly tenants of Prosperous View Court have been waiting, nervously. A Hong Kong building renovation–裝 修 is a form of slow torture so inhuman and despicable that it has been banned by the Geneva Convention. My buddy Josh spent 8 months living under renovation conditions, in a building that was scaffolded from top to bottom in bamboo, then wrapped up like a Christo art project in dark green plastic mesh that covered all his windows, turning his flat into an eerie den with a Kryptonite glow.

Everywhere in Hong Kong you see buildings matchsticked with bamboo and wrapped in netting. Modern construction here is a slap bang, profit-squeezing affair, and most new buildings start looking shabby in a few years. Things are built with the idea that they will be torn down in 10 years, 15 at the outside. Rice farms in the New Territories are buried under ever-growing heaps of construction debris. Hey, it’s the Hong Kong way!

At least it has been until recently. A handful of grass roots green activists and Jane Jacobs-ite urban planners are fighting the system, and gaining a foothold here and there. Hong Kong has lots of gorgeous and solid old low-rise and art deco buildings, and unused factories that are ripe for conversion. Renovation, not demolition, is the rallying cry of these new Hong Kong urban activists.

I support this movement. We should repair, not raze. So how can I complain when it moves from theory to reality, from the buildings across the street to the one I live in?

“Of course they will have to da paang,” laughed Mr. Poon, the night doorman. ” The whole thing take, maybe, six months–rainy season is coming.” Da paang? I called Leung up to ask for a translation. Did it mean what I thought?

I shuddered. I am home during the days most days, working. How could I do anything bathed in Kryptonite green for 12 hours?

But when would this work begin? No one seemed to know.

Then, one day last month, I walked into my lobby and noticed Mrs. Wong speaking to an affable young man. I overheard the words “jong sau”. When the man stepped into the elevator with me, I asked him if he knew anything about the impending construction.

“Actually, I’m the building association president,” he told me. “I’m coordinating the work.”

He told me that the renovation was only a replacement of the building’s external pipes, which had become rusted over time. The work would last exactly 63 days, and the scaffolding would only be constructed over the parts of the buildings where the pipes are.

Yesterday, at 10am, Jack the building manager, assisted by Mrs. Wong, held a ceremony with the manager of the construction company in the sitting out area behind Prosperous View Court. They burned sticks of incense over a bowl of fruit.

I knew that “hoi gung” (literally “start work”) ceremonies were common for new buildings, and even used before starting work on a film. But I didn’t know they were performed for renovations. “We would always do this,” Mr. Building President told me. “To make sure the work is performed well.” (Note to self: I should recommend the Hoi Gung ceremony to my building’s coop board back in Brooklyn).

The scaffolders arrived this morning at 9:30am. By 11, their shaky matchstick grid of bamboo poles rose almost to my apartment on the 12th floor. I watched them from my kitchen window in awe.

What amazing cool. I’d admired these guys from afar before, but watching them upclose is a revelation. They scramble, pirouette, work and balance with four limbs at once. Two of the guys, I notice, are climbing the slippery poles wearing only simple cloth kung fu shoes.

The bamboo scaffolders belong to a very exclusive union of professionals who dominate this traditional trade unique to Hong Kong (it’s been outlawed in most of China, where its considered too dangerous).

I think they are even more awe-worthy than the wire acrobats who dazzle moviegoers in Hong Kong’s kung fu movies. Because these guys aren’t protected by wires. There’s no safety net below as they dance on the temporary stages they build in the air.

They’re back from lunch now, and I’m going over to my window to watch some more. 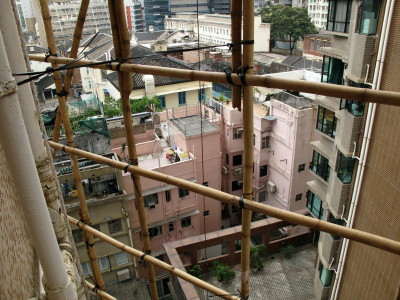 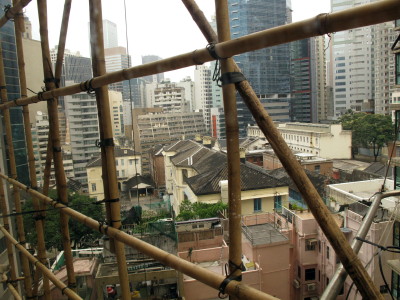